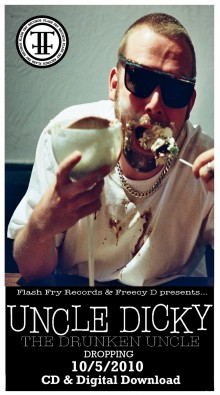 The album is called ‘Drunken Uncle’ by Uncle Dicky — aka Freecy D of Lost Souls fame. It will be released on the 10th May 2010 on Flash Fry Records and will be available on CD and digital formats.

All of the beats were written by 2005, some were from the last century.

I co-wrote/produced the music with Biji Talls and two with Mr J. As a matter of fact Mr J missed out on a co-production credit on the sleeve for the tune “Running on fumes”.

Post-production was done by Iris (RIP) of Iris and Mole fame. Mastering was done in Poland, by OSTR and friends.

Anyway, I’m glad I got to see how the story ended with the release date now in sight. Looking forward to hooking up with the Uncle Dicky — ‘Drunken Uncle’ at the launch at Jamm in Brixton.